He also submitted a “if I don’t hear from you, I’ll assume you said yes” endorsement request to a current member of the Orange County Board of Supervisors.

Taken together, they call into question the legitimacy of other endorsements Lal claims for his council candidacy.

In a press release issue on August 19, Lal claimed endorsements from a number of leading Orange County officials, including Daly and Valencia:

I contacted Daly and asked if he had endorsed Lal.

“I have not,” replied Daly.

For his part, Valencia said he has not endorsed Lal, and has only met him once, by happenstance, at the Registrar of Voters.

“Hi DAN – My very good friend Dan. I am a non-partisan candidate running for Anaheim City Council from District six Anaheim Hills. Your friend TREVOR O’Neill is no longer running from here. I have a huge support and I will win this Districk. Will you as my friend endorse me. I am neither a Republican or a Democrat and running as a neutral. Can I count on your support and announce that you have endorsed me. I hope to hear from you and if I don’t I will believe that you have no objection.” [emphasis added] 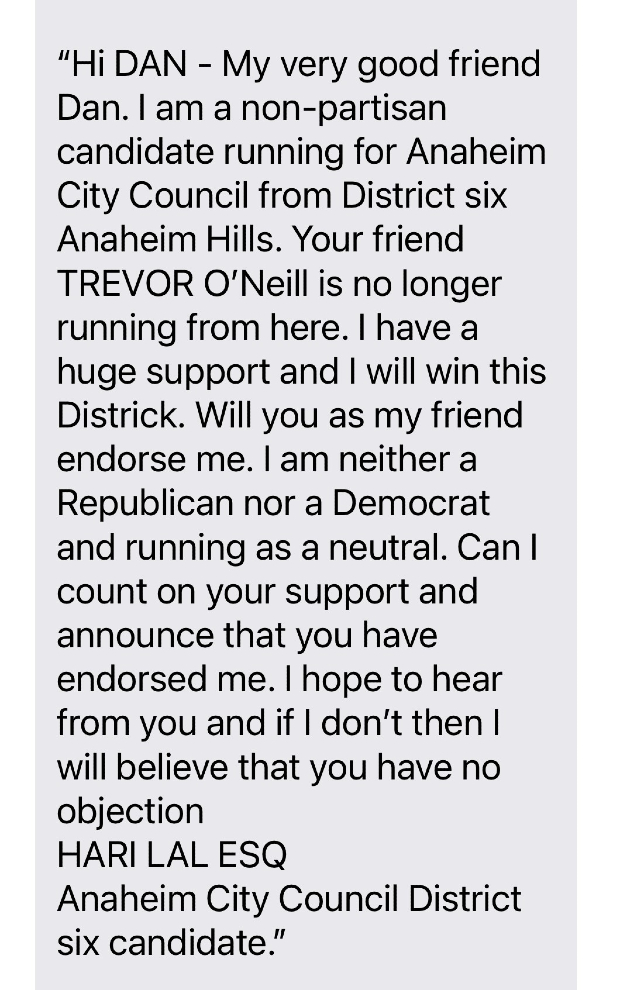 In other words, Lal told his “very good friend” Supervisor “Dan” Wagner that unless Wagner actually tells him no, Lal will just assume he has the endorsement.

Lal also told Wagner he is “neither a Republican or Democrat” when he is, in fact, a registered Democrat running with the endorsement of the Democratic Party of Orange County.

Last week, I reported that Lal has not paid property taxes on his house since February 2019 and owes $146,377.93 in delinquent property taxes. Lal’s defense is a convoluted explanation that is contradicted by the facts.

Given this track record, one has to wonder if the other endorsements claimed by Lal are real. Yesterday, I e-mail Lal asking about the false claims of endorsements by Daly and Valencia, while also requesting confirmation of the other listed endorsements (a signed endorsement card, a letter, e-mail, text, etc.).

More than 24 hours later, no response from Lal.