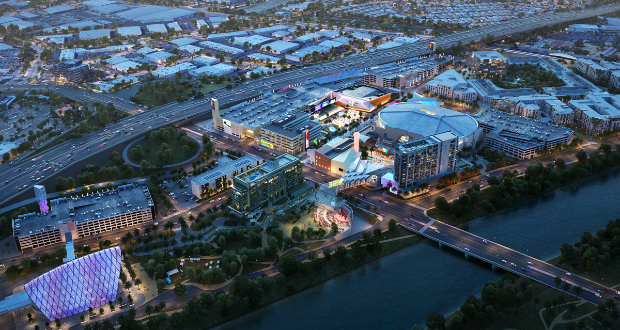 On Tuesday, the Anaheim City Council voted unanimously to approve ocV!BE, an ambitious $4 billion development project by the owners of the Anaheim Ducks to transform the 100-acre area around the Honda Center with new entertainment, dining, residential, officce, hospitality, and lifestyle amenities.

OcV!BE is an initiative of Henry and Susan Samueli, the longtime owners of the Anaheim Ducks and venue managers of Honda Center.

“We thank the Anaheim City Council and City staff for their strong support of our vision for ocV!BE and our continued partnership with the City of Anaheim,” said Henry and Susan Samueli.  “We look forward to starting construction soon on this important community asset that will showcase Anaheim and Orange County, while also providing world-class entertainment and offerings for local residents, visitors, and our Anaheim Ducks fans.”

“What’s not to like about this project?,” said Mayor Pro Tem Trevor O’Neil. “We’re bringing almost $10 million in new projected annual revenue for the city that can be put towards things like public safety, neighborhood investments and other community benefits, diversifying our tax base, creating thousands of local jobs – temporary and permanent – and bringing much needed affordable housing without burdening taxpayers or developers.”

“This will finally help activate our regional transportation hub ARTIC, and creating world class destination to help fulfill the vision of the platinum triangle by bringing exciting dining entertainment, public spaces and recreational opportunities to residents and visitors alike,” said O’Neil. “I’m proud to engage in this partnership with the Samuelis and really excited about the benefits that this project is going to bring to Anaheim.”

The project will also include farmers markets, a food hall, craft breweries and rooftop bars.

ocV!BE is planned as a transit-oriented development. It will integrate the ARTIC transit center (which is management by AAM) into the project, and a pedestrian bridge over Katella Avenue will connect the arena side of ocV!BE to the ARTIC side. The project will include several parking structures offering more than 7,000 parking spaces.

The project will also include 1 million square feet of office space, and is designed with sustainability in mind.  On-site solar panels will generate about 6 megawatts of electricity and 75% of the water used will be non-imported water from the Orange County Water District.

The economic impact will be enormous: an estimated 10,000 construction jobs and 3,000 permanent jobs. The project build-out will generate an expected $2 billion economic impact, with a project annual economic output of $400 million.

The road to council approval began with a 2018 agreement under which the Samueli’s purchased the city-owned property around the Honda Center and taking over management of the ARTIC transit center, while committing to keeping the Ducks in Anaheim for decades to come.  The Samuelis spent the next few years acquiring additional property and master planning the 100-acre site.

Construction is expected to start by the end of this calendar year, with the project’s first phase opening in 2025 to the public.

“Our ambition is for ocV!BE to be the social and entertainment center of Orange County and Southern California, providing a vibrant collection of experiences celebrating the diversity of our community,” said Bill Foltz, CEO of ocV!BE.