Union Interests Pour Another $150,000 Into Electing Aitken, Jabbar and Leon To Council 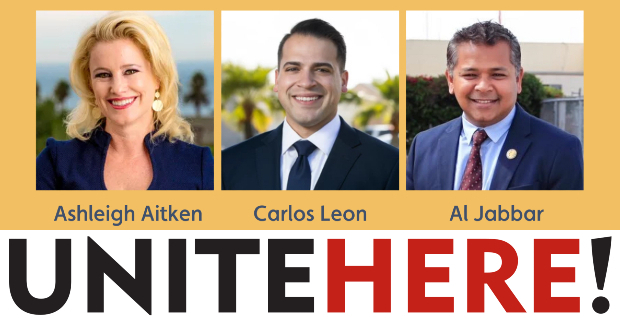 Anaheim Resort union interests have dumped another $150,000 into their independent expenditure campaigns supporting Ashleigh Aitken for mayor and Al Jabbar and Carlos Leon for city council.  All three candidates are Democrats.

This comes on the heels of $125,000 donated to the pro-Aitken/Leon committee by another Resort union, United Food and Commercial Workers Local 324. That brings to $275,000 the amount being spent so far by Resort unions to put Aitken, Leon and Jabbar on the Anaheim City Council.

Legalizing cannabis and then seeking to unionize those legalized cannabis businesses is a majorly priority for UFCW Local 324.

UNITE-HERE Local 11 currently trying to qualify for the ballot an initiative dramatically increasing the minimum wage at Anaheim hotels and event venues from the current $15 an hour to $25 an hour. The measure would also impose burdensome workplace rules that significantly increase labor costs – while exempting hotels and venues that signed unionization agreements with Local 11.

Aitken, Leon and Jabbar have so far declined to respond to requests for their positions on the $25 on hour minimum wage measure.