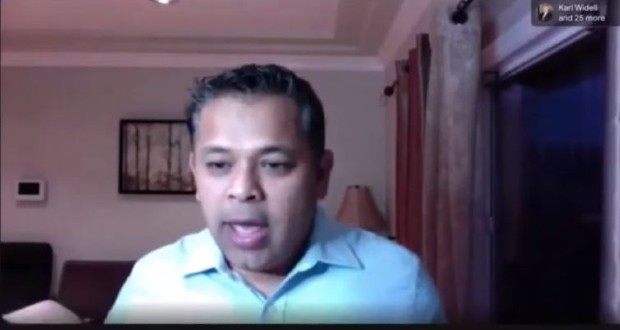 Al Jabbar: It’s only wrong for other politicians to intervene for campaign donors.

It’s Election Day in Anaheim and across the nation. The contest in Anaheim’s District 3 is between two candidates: Natalie Rubalcava and Al Jabbar.

Although both are Democrats, they represent radically different strains of that party.

Rubalcava comes from the moderate tradition that understands businesses and entrepreneurs are the geneses of economic growth and opportunity while supporting a vigorous labor movement.

Jabbar exists within the “social justice” Left of the party and is a strong supporter of socialist Sen. Bernie Sanders, a federal takeover of health care, student loan cancelation, higher taxes, etc. As a member of the Anaheim Union High School District Board of Education, he has loudly opposed charter schools and school choice, slavishly supported teachers union demands – including continuing school mask mandates long after it was clear they did far more harm than good – 0and advancing radical racial ideologies in curriculum.

One can also add rank hypocrisy to his list.

Jabbar spoke at the July 12, 2022 Anaheim City Council meeting urging their adoption of a campaign finance “reform” measure offered by his friend and ally, Councilman Jose F. Moreno. The proposal was more an assault on free political speech than a measure to ensure public integrity, but Jabbar went to the podium to urge its adoption and lecture the council majority on ethics.

However, Jabbar himself used his position as an AUHSD trustee on behalf of a major campaign donor in order to preserve their contract with the school district.

At its April 9, 2020 meeting, the AUHSD Board of Education took up a staff request to contract with Obria Group, Inc. and Beacon of Light to provide AB 329-mandated sexual health education – at no cost to district taxpayers.

Obria provides reproductive healthcare services through its 48 affiliated medical clinics throughout the U.S., and Orange County-based Beacon of Light “educates teens and their families about healthy relationships and good decision-making surrounding sexual health using medically accurate, age appropriate content that engages students in dynamic, culturally relevant presentations,” according to the AUSHD staff report recommending that the district sign an MOU with Obria/Beacon.

The district had been using Planned Parenthood representatives, who would come into the classroom to teach the curriculum.  This sparked considerable opposition from parents, many of them Asian-American, in the western part of the district.

Planned Parenthood is a major financial player in Democratic politics and is one of Jabbar’s biggest – if not the biggest – campaign contributors. Planned Parenthood rotuinely contibrutes the maximum amount to Jabbar, and has donated thousands of dollars to his campaigns.

The item was pulled from the consent calendar, and Jabbar had little to say about Obria/Beacon of Light but repeatedly voiced his concern (go to the 2:30 mark) that contracting with them would “sideline” or “replace” Planned Parenthood.

Assistant Superintendent Jaron Fried recited a number of reasons why working with Obria/Beacon of Light rather than Planned Parenthood would be a better deal for the district.

He noted Obria’s curriculum is “more comprehensive” than Planned Parenthood’s, and that Obria woukld provide free professional development training for AUSHD teachers so that they could teach the curriculum themselves, rather than brining Planned Parenthood representatives into the classroom.

Fried said staff had vetted the curriculum and that it was compliant with state law and also passed muster with the numerous parents who were opposed to using Planned Parenthood, many of whom had opted out of the program.

Fried told Jabbar those parents also liked that contracting with Obira meant AUSHD teachers, rather than Planned Parenthood staff, would be teaching the sexual health curriculum.

“This was the feeling from some of the parents who have been resistant, that they wanted the teachers to be able to cover the content not necessarily rely upon another entity,” Fried explained to Jabbar.

“This group is providing a curriculum and training that our teachers are using. So it’s, it’s different than what Planned Parenthood was doing per se where they were coming in as the guest lecturer,” said Fried.

None of this made a dent in Jabbar’s opposition, who described those parents as being influenced “by outside organizations.”

Indeed, Jabbar was far more concerned about “sidelining” Planned Parenthood than with the concerns of parents who objected to having the morally sensitive and fraught topic of sexuality taught to their children by representatives of an organization that specializes in terminating the lives of unborn human beings.

What Jabbar never disclosed was that Planned Parenthood has donated thousands of dollars to his various campaigns for elected office.

When the vote came, Jabbar voted against the staff’s recommendation to contract with Obria/Beacon of Light, while Trustees Anna Piercy and Brian O’Neal voted “yes.” Trustee Annemarie Randle-Trejo abstained, and since Trustee Katherine SMitgh was absent, that mean a 2-2 tie. Since 3 affirmative votes are required for approval, the Obria contract was killed and Planned Parenthood.

Thanks to Jabbar’s opposition, his major campaign donor, Planned Parenthood, would continue coming into AUSHD classrooms to teach sex education.

If Al Jabbar really believes what he was saying at the July 2022 council meeting, he would have recused himself from that vote instead of leading the charge to ensure his campaign donor wasn’t “sidelined.”