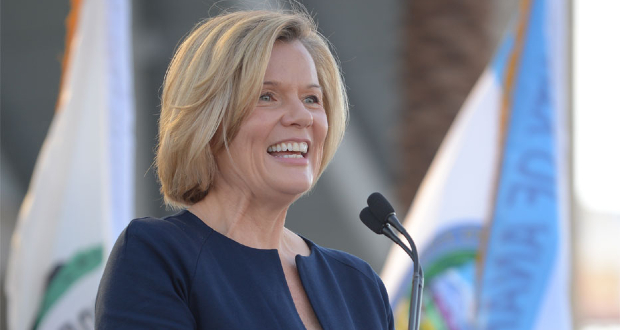 Natalie Meeks, the former public works director for the City of Anaheim, won a landslide victory over attorney and council gadfly Hari Lal, in the race to represent District 6 (Anaheim Hills) on the Anaheim City Council.

Meeks entered the race at the last moment, after incumbent Councilman Trevor O’Neil decided to run for mayor rather than re-election. Lal had already entered the race several weeks earlier.

Meeks, who is currently a member of the Anaheim Planning Commissioner, campaigned as a results-oriented conservative promising ledge to increase the number of police officers, greater use of technology to reduce crime, improve fire evacuation plans, and deliver on infrastructure improvements and amenities to improve quality of life in Anaheim Hills. Meeks cited her experience as public works director in helping deliver to Anaheim Hills things like a police substation, library improvements and the East Anaheim Community Center.

Lal, for his part, campaigned on promises of transparency, pledges to fight the “cabal” and his experience as a director of the GHAD (an acronym he never explained in his candidate statement).

Lal was dogged by the revelation  that he had failed to pay his property taxes for more than three-and-a-half years and owed more than $146,000 to the County of Orange. That news was broken here and in the Anaheim Observer and the OC Independent, but ignored by the Voice of OC and the OC Register. Lal responded with a series of false claims and untruthful explanations while threatening to sue this author – but two days after I reported the story, Lal decided to pay his unpaid tax bill.

Lal also manufactured endorsements from leading Democratic elected officials and claimed he’d been appointed to a city commission that did not exist. Lal had other issues, such as questions raised by fellow residents of the gated community where he lives, who were being stonewalled as to the status of a $300,000 settlement the HOA received from CalTrans due to damaged caused by the Canyon 2 fire.

Lal did, however, have the endorsement of the Democratic Party of Orange County and the support of mayoral candidate Ashleigh Aitken and Councilman Jose F. Moreno.

In the end, it wasn’t even close, as Meeks beat Lal like a drum, rolling up a 43 point margin of victory:

Meeks won every precinct but one: Precinct 02802, where only one vote was cast: