Councilman Jose Diaz Elected To OCTA Board of Directors 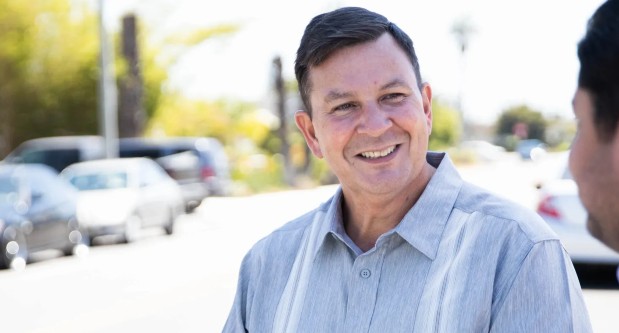 Last week, OC’s City Selection Committee met at the Orange City Council chambers and went about filling seats on regional governing bodies with little controversy, including the election of Anaheim Councilman Jose Diaz to the Orange County Transportation Authority Board of Directors,

However, the body deadlocked on electing the Orange County City Representative on the OC Local Agency Formation Commission, an obscure but important body that governs matters such as city incorporation, city annexations of unincorporated areas, consolidations of special districts and municipal boundary changes.

READ: Cities To Select Reps On OCTA Board of Directors While Negotiations With Teamsters Drag On

Orange County cities have 10 seats on the OCTA Board, and seven of which were up for grabs. There are two city representatives from each of the five supervisorial districts – one elected on a population-weighted basis and the other on a one-city/one-vote basis.

He was challenged by Huntington Beach Councilman Dan Kalmick, who talked about his “passion” for transportation and conviction that the only way to reduce congestion “was getting people out of their cars,” and that included expanding bike lanes.

Harper garnered the support of cities accounting for 59% of the 1st District population, and thus a second term on the OCTA Board.

2nd Supervisor District (Santa Ana, Orange and Tustin): both city seats were up. Santa Ana Councilwoman Jessie Lopez ran for the population-weighted seat with the support of out-going Santa Ana Mayor Vince Sarmiento. Since Santa Ana accounts for nearly 60% of the 2nd District population, her appointment was a foregone conclusion – plus she was the only candidate.

Orange Mayor Mark Murphy – the current OCTA Chairman – withdraw his candidacy for a second term since he is narrowly losing his mayoral re-election, and instead nominated Orange Councilman Jon Dumitru for the one-city/one-vote seat. Dumitru was only candidate and was appointed unanimously.

Irvine is the 800-pound gorilla in this arena, accounting for more than 50% of the district’s population, giving the Irvine mayor complete control over the appointment for the population-weighted seat on the OCTA Board.

Irvine Councilwoman Tammy Kim had earlier submitted her application for the seat. However, Mayor Farrah Khan subsequently decided to seek it herself. She did not attend the City Selection Committee meeting, instead delegating her proxy to outgoing Councilman Anthony Kuo, who nominated her from the floor.

Though both Khan and Kim are Democrats, they are odds personally and politically and regularly clash with each other.

Khan’s moved prompted a bitter denunciation from Kim when she addressed the committee from the podium. Kim believed that since she had already applied for the post, it was unfair for her own mayor to jump in and supplant her, and assailed Khan for “not even bothering to be here.”

However, the outcome was predetermined and when the votes were tallied, Khan won with the support of cities representing 61.89% of the 3rd District population.

4th Supervisor District (Anaheim, Buena Park, Fullerton, La Habra, Placentia and Stanton): The population-weighted seat has traditionally been held by a member of the Anaheim City Council, since that city accounts for almost 50% of the district population. It has been vacant since Mayor Harry Sidhu’s resignation in May, but only has one year remaining on the term.

The Anaheim City Council had unanimously voted to deputize Councilman Jose Diaz to wield the city’s vote. Diaz was also the only candidate for the seat, and was therefore elected.

Fullerton Councilman Fred Jung was seeking a second term representing the one-city/one-vote seat, and was being challenged by Brea Councilman Marty Simonoff. Jung is a Democrat and Simonoff a Republican. There was furious behind the scenes lobbying of Placentia Mayor Rhonda Shader, who had committed to Jung, to vote instead for Simonoff. At least one 4th District city representative told OC Independent that Shader had indeed told them she would support Simonoff. At the end of the day, Shader supported Jung, who edged out Simonoff 4 to 3.

The outcome was the most lopsided of the evening, as Federico garnered seven votes, while Stephens only received the vote of his own city.

Another surprising outcome was the City Selection Committee’s inability to agree on the OC City Representative to LAFCO, in balloting that took place prior to the OCTA Board voting.

The committee’s rules prescribe up to three rounds of balloting for a candidate to reach the winning number of at least 18 votes. If no candidates gets 18 votes, a two-thirds majority can authorize a fourth round of balloting.

Six candidates threw their hats into the ring:

The second ballot failed to achieve a result. Whitaker was dropped and James and Kim advanced to the third ballot.

Again, no one received a majority: Kim garnered 15 votes to James’ 13 votes.

The committee voted to conduct a fourth ballot, and the result was identical. As a result, the appointment was continue to the City Selection Committee’s next meeting, which is in May of 2023.

The vote for the alternate representative to LAFCO failed by the same margin, with Huntington Beach Councilman Dan Kalmick receiving 15 votes to 13 votes for Laguna Woods Mayor Carol Moore.