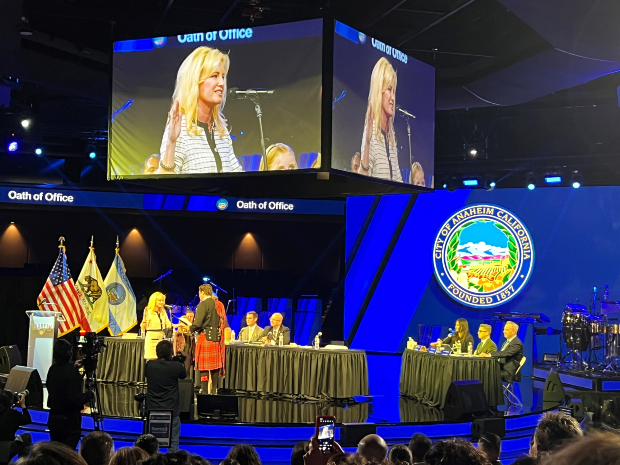 Ashleigh Aitken took the oat of office Tuesday night as Anaheim’s first woman mayor – the office that narrowly eluded her in the 2018 election. Also taking their respective oaths of office were newly-elected Councilmembers Carlos Leon from District 2, Natalie Rubalcava from District 3 and Natalie Meeks from District 6.

There are now three women on the Anaheim City Council, a historic water-mark, and a diversity of political outlooks among its members.

All the new councilmembers took to the podium to give inaugural remarks following the oath of office. Common themes running through their remarks were calls for putting past fractiousness behind in favor of collaboration, and fostering economic opportunity with investment in neighborhoods.

“We face challenges, but as we stand at those crossroads, and we choose what path wee want to take moving forward, we must never lose sight of one important fact: we are Anaheim,” said Aitken.

“I hope we return to kindness and choose opportunity over fear and uncertainty, [and] turn our backs on vitriol and suspicion in favor of capacious collaboration and understanding,” said Aitken.

Aitken also noted the oft-overlooked reality of local government: “I ran for mayor because I believe we are most affected by the issues that occur 50 feet from our front door – whether it’s a streetlight or street median, graffiti or a Greenbelt.” 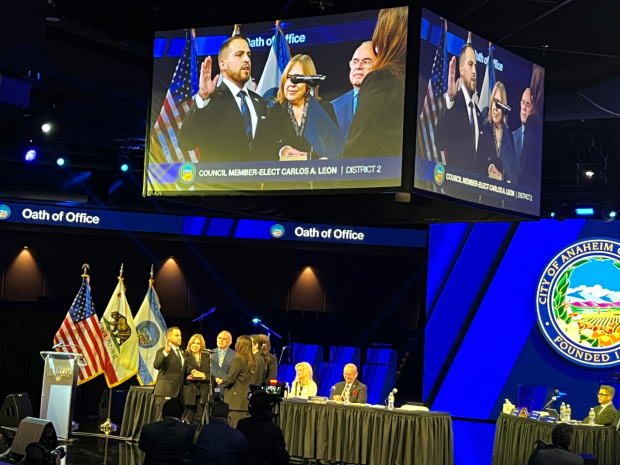 “We must address homelessness in our communities. We must continue building and growing throughout our city, creating safer neighborhoods, building more and better housing opportunities, supporting our businesses small and large, encouraging more investments especially in West Anaheim, and yes, rebuilding trust at City Hall,” said Leon.

Councilwoman Natalie Rubalcava, a fourth-generation resident of District 3, harkened to the social progress made since her grandparents’ were young. 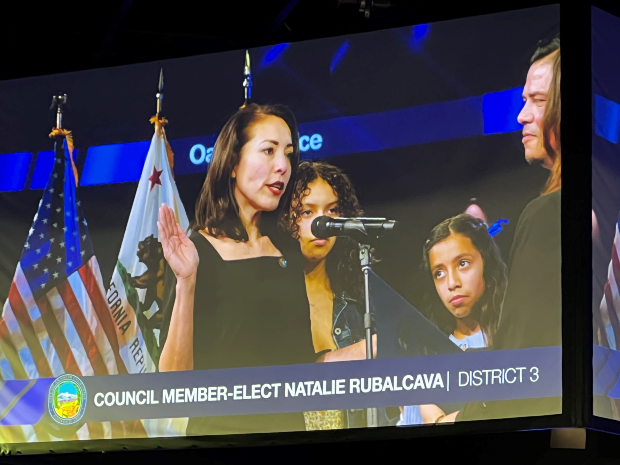 “I’m so proud to represent the district where I live and was born and raised. The founding fathers of Anaheim, for lack of a better term, 165 years ago I bet did not expect to see a Mexican American woman representing the City of Anaheim,” said Rubalcava.

“In my grandparents lifetime could only swim in the public pool once a week because they were Mexican,” said Rubalcava. “And then they would drain the pool so that other people could swim in a clean pool.”

“So for me, this is a meaningful opportunity for me to represent the people who live in Anaheim, who built the city who’ve made it what it is,” said Rubalcava.

“We are Anaheim,” continued Rubalcava. “This is not my win. This is for the City of Anaheim and the people of district three who have been overlooked for too long.”

“We’re here to make sure that we are going to make a difference,” said Rubalcava. “We’re going to serve the people who are living in the city with integrity and compassion and always be responsive to the needs of our community.” 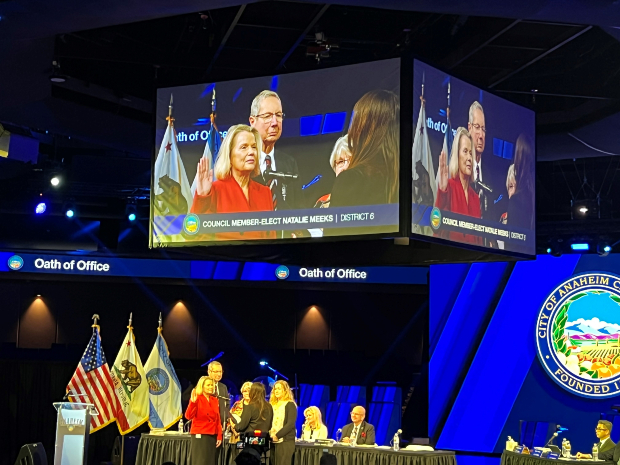 “As a council member, I will prioritize initiatives that create an environment that fosters opportunity for everyone,” said Meeks. “This includes the safety of you, your family, your loved ones. It also includes the safety of your property, your assets, your belongings, because property crime isn’t victimless it. hurts people financially, and causes feelings and personal violation, vulnerability and mental stress.”

After all the oaths of office had been given, Aitken presided over a brief council meeting that consisted solely of council communications – the time during which councilmembers can exercise their prerogative to place items on future agendas (this was restored at the initiative of then-Mayor Pro Tem Trevor O’Neil in the wake of former Mayor Harry Sidhu’s resignation).

Meeks took the opportunity to request council workshop on where homelessness efforts stand and a discussion of developing a multi-year strategic plan to guide council policy making.

“I believe that it’s important to know where we’re headed,” said Meeks. “Once you have that document in hand it would be a lot easier for us to rally around, to move that vision forward.”

Rubalcava requested staff provide a review of planned and requested traffic safety and mitigation measures such as speedbumps and stop signs, as well as a council discussion on resurrecting the neighborhood councils that were dissolved in the wake of shifting to conducting council elections on a by-district basis.